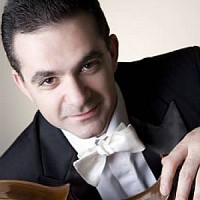 While Finkelshteyn maintains a busy private teaching studio and presents frequent public master classes at major conservatories including the Manhattan School of Music, Peabody Conservatory, Indiana University, and University of Cincinnati College-Conservatory of Music (CCM). He has also been on the faculties of the Jonannesen International School of the Arts, National Orchestral Institute, and the Orchestra Academy at Indiana University. In January 2012, Finkelshteyn was appointed to the faculty of CCM where he teaches applied cello lessons and designed a new orchestral repertoire audition course for cello.

Finkelshteyn was born in Leningrad and began his musical training at the St. Petersburg Conservatory Special Music School under the tutelage of Sergei Chernyadiev. Once he immigrated to the United States, he studied with Tanya Remenikova at the University of Minnesota and attended The Juilliard School for his bachelor’s and master’s degrees as a full scholarship student of Harvey Shapiro. His chamber music coaches include Felix Galimir, Samuel Sanders, and members of the Juilliard String Quartet.

The cellist won his first orchestra position with the St. Louis Symphony prior to his graduation from Juilliard and was a member for five seasons under the late conductor Hans Vonk. From 2002-2009 he performed as principal cellist of the Baltimore Symphony Orchestra led by Yuri Temirkanov, and became principal cellist of the Cincinnati Symphony Orchestra in 2009, where he holds the Irene & John J. Emery Chair. Finkelshteyn performs on a cello by Giovanni Grancino, c. 1700.